Q1 2018 report provides a summary of the Dubai residential market as well as a sector focus on the commercial property market. Price movement, rent and yield statistics, residential transactions and upcoming supply of residential properties are provided through Property Monitor, a real estate intelligence platform, powered by Cavendish Maxwell. The report also incorporates the Property Monitor Residential Survey, conducted among partner agents operating within Dubai. The survey showcases how new enquiries, leasing activity and transactions, among other metrics, changed over the previous quarter. It also provides an outlook on the following quarter and predictions by professionals, which are studied against real performance.

Transacted prices for villas/townhouses have settled above the 2017 average during Q1 2018, which is mainly due to limited lower priced inventory entering the market this year compared to the launches in the first half of 2017.

Meanwhile, trading prices for apartments continue to shift towards the lower end of the price band, averaging AED 1.2 million in Q1 2018. The middle-income population (AED 15,000 to 25,000 per month income bracket) has been the key target segment for the majority of ‘affordable housing’ apartment launches by developers in recent months. The majority of this new inventory offers smaller unit sizes to keep prices attractive, along with providing incentives, such as Dubai Land Department (DLD) fee waivers and payment plans with limited commitment (20-30%) during pre-construction period and extended post-handover payment options.

Price movement in the last 12 months has varied not only between communities but also among different buildings within the same community, thus reflecting greater differentiation in how available properties are now trading.

This differentiation is expected to continue as buyers have an increasing supply base to choose from and property fundamentals such as developer track record, proximity to social and public infrastructure, ease of access, maintenance, among other factors will drive price movement. 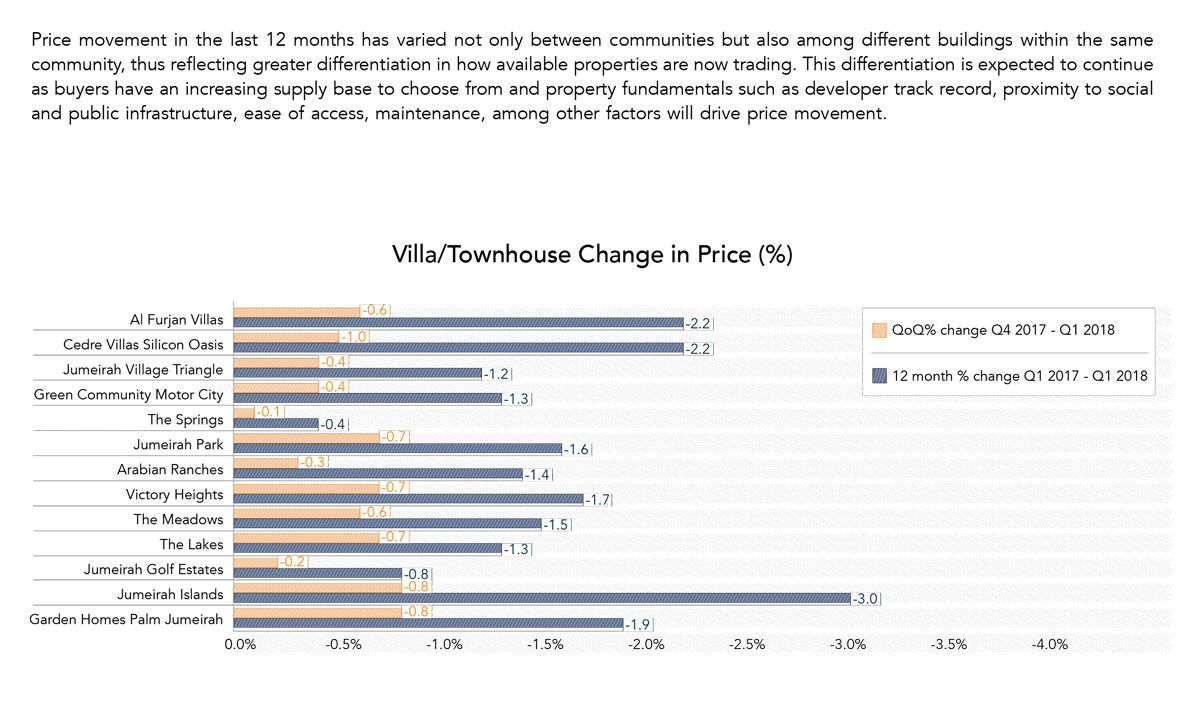 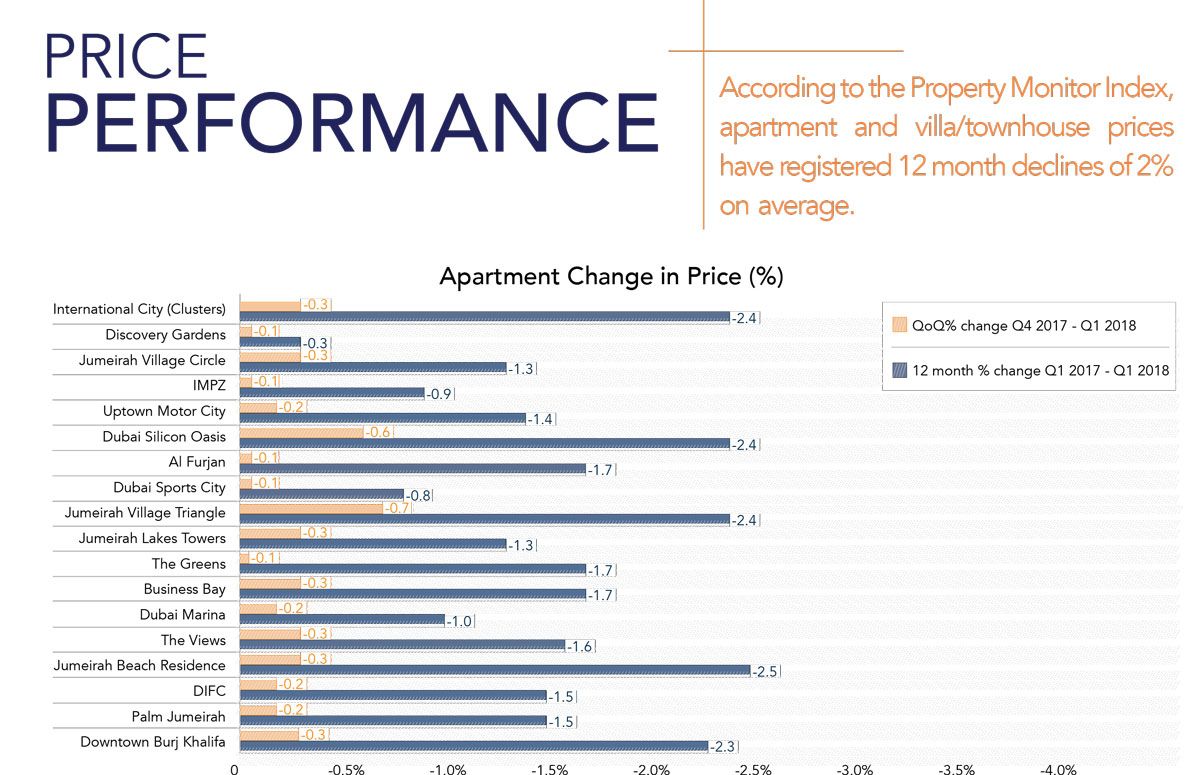 Rent declines are expected to continue during the second quarter of 2018, with new handovers planned in both freehold and leasehold communities across Dubai. The pressure on housing allowances has also impacted rental market performance and the pool of tenants at the higher end of the spectrum continues to shrink. It has been a tenant-led market and the increasing stock levels each quarter have provided ample opportunities for negotiation on base rents as well as payment terms such as number of cheques. Declines will be more pronounced in areas with increasing supply and those located away from central business districts and public infrastructure. Additionally, building maintenance and quality remain significant drivers of occupancy levels, thus impacting net realised yields on investment properties. 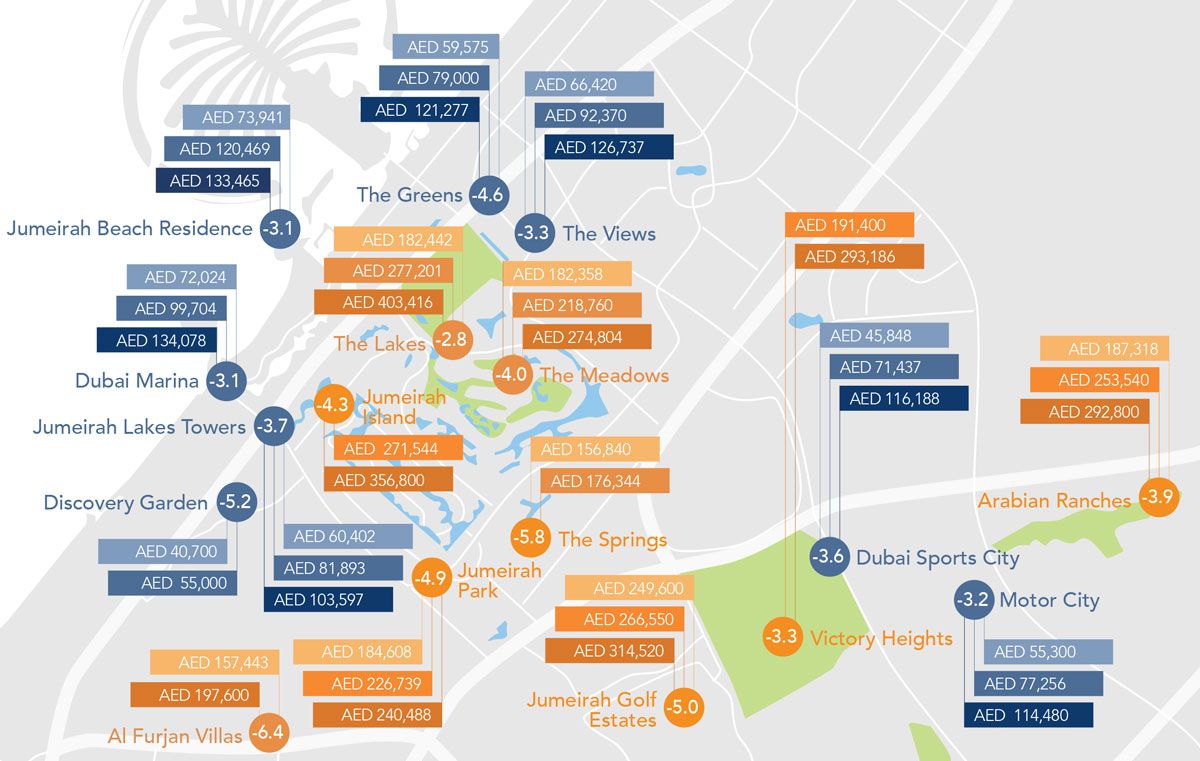 Approximately 3,800 residential units have been handed over across Dubai in Q1 2018.

The majority of handovers during the first quarter of 2018 were in International City, Jumeirah Village Circle and Dubai Studio City, with more than 250 units being handed over in each location. More than 92% of the handed over units were apartments. For the remainder of the year, the majority of upcoming supply is concentrated in Business Bay, Jumeirah Village Circle and Town Square, all of which have more than 2,000 units scheduled for handover before the year end. Of the total scheduled handovers due for the remaining three quarters, approximately 46% of the upcoming supply is expected to be handed over during Q2. Increasing handovers will continue to impact rents in most locations across Dubai as tenants have more choice. This will also impact occupancies in existing stock and should be factored into net yield estimations for the forthcoming period.

Business Bay, Mohammed Bin Rashid City and Jumeirah Village Circle dominated the off-plan transfers tally during the first quarter of the year. Meanwhile, traditional favourites including Dubai Marina and International City led the secondary market apartment transfers, along with Dubai Sports City, which accounted for 13% of the total apartment resale transfers during Q1 2018. 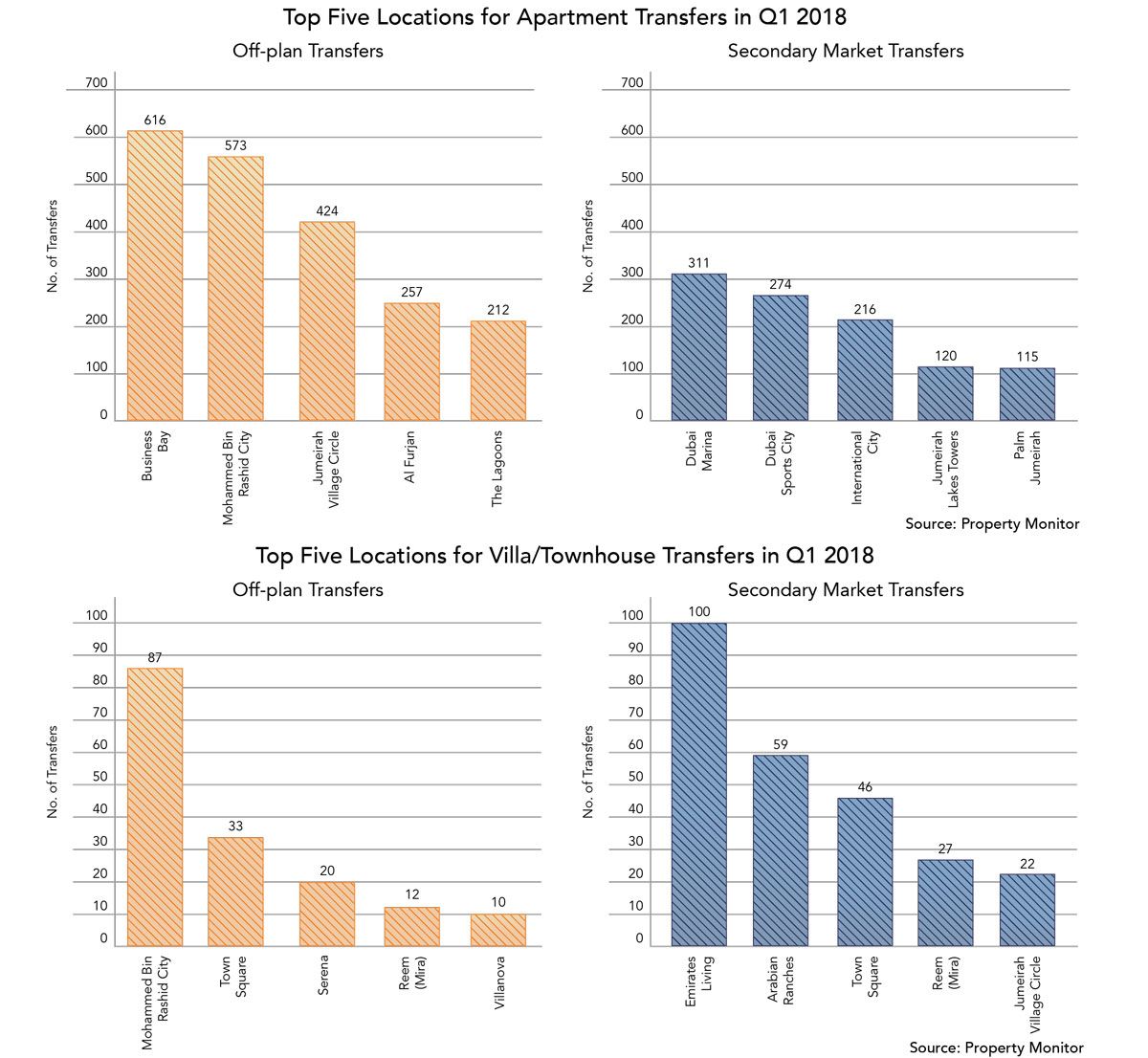 2017 witnessed a continuation of trends from the previous 18 months with a difficult and competitive market place. Enquiry levels picked up as the year progressed and rallied strongly in the final quarter, after a quiet summer period. The vast majority of enquiries were for the small to mid-sized sector of the market with requirements for 50,000 sq ft or less accounting for 79% of demand*. There were also a number of significant occupier requirements above this level, including the big box market of more than 100,000 sq ft. Many of these requirements have remained unsatisfied due to the lack of good quality stock available in the market, which has led to more occupiers exploring the Build to Suit (BTS) route, therefore delaying take up.

There has been an increase in vacancy levels with many occupiers feeling financial pressure due to the current economic climate. Some businesses within certain industries, such as oil, gas and commodities, are now looking to rationalise their real estate holdings in a bid to reduce overheads and are therefore looking to either sell facilities which are considered excess to requirement or downsize operations. This is a trend which is even more apparent in the Free Zones where businesses are also facing increases in their land rents at rent review or lease renewal. In addition to this there are a number of speculative developers bringing new supply to the market leading to an unprecedented level of disposal instructions.

The key driving forces in the market throughout 2016-2017 were from the logistics and distribution sectors and the traders of fast moving consumer goods (FMCG) and we expect this trend to continue throughout the course of 2018. This demand is not being met by the specification of existing warehouses, whereby occupiers in such industries prefer more modern European specification distribution warehouses which are not as readily available in the region. However we are seeing a shift in developers being more conscious towards the needs of the end users reflected in the new products they are bringing to the market in locations such as in Jebel Ali Free Zone and National Industries Park.

Among the influential factors of 2017 affecting take up levels was the disparity between landlord/seller pricing expectations and what the market is willing to pay; often with asking prices 25-30% above market levels. We did witness deals concluding where landlords and sellers were able to realign expectations with the market which is encouraging. However, in still too many cases, there was little room for negotiation, with some landlords and sellers unwilling to change their pricing aspirations which have likely resulted in their properties continuing to sit vacant. When paired with increasing holding costs in the form of land rent and maintenance, this could be a costly and risky strategy.

Occupiers remained cautious of the market since the drop in the oil price in 2014, however there was an improvement at the end of 2017 as oil prices recovered above the US $60 mark. Although there has been wider geopolitical instability from events such as the Brexit referendum, the uncertainty attached to a Trump Administration and more locally the break down in relations between Qatar and the rest of the GCC, occupiers are starting to factor in and account for external market forces within their decision making strategies similarly to more developed markets.

Whilst we expect transaction levels to remain below 2015 take up, strong enquiry levels since the start of 2018 suggest there will be a modest increase from 2017. Nevertheless, it is anticipated that occupiers will continue to carry out greater due diligence and analysis, which will impact decision making times and there will be a continuing differentiation in pricing expectations between sellers and buyers.

There will continue to be many properties sitting stagnant on the market however if landlords and sellers are willing to adjust to the current market levels, then they should secure occupiers and buyers. We anticipate an increase in the level of occupiers looking to relocate to other emirates in a bid to reduce occupational costs incurred where they are more responsive to the challenges facing many businesses. However, the additional benefits of working within Dubai such as a better legislative and legal framework, more developed infrastructure, working in closer conjunction with suppliers and consumers and easier access to a greater labour force will continue to outweigh any occupational cost savings which may be achievable in other emirates.

Due to the low levels of good quality supply in the well established areas such as Dubai Investments Park and Al Quoz, which have no development land remaining, it is likely that interest in the areas around Al Maktoum International Airport, such as Dubai South and Dubai Industrial Park will increase as occupiers are forced to look at alternative locations to find suitable properties. Prices in free zones are expected to decline as increased supply and high vacancy levels, coupled with rising land rents, continue to compress capital values. Nevertheless, with an increase in the oil price, Expo 2020, further capital investment in the expansion of Jebel Ali Port on the horizon and the overall maturing of the market, the general sentiment is more positive than it has been for the past couple of years. 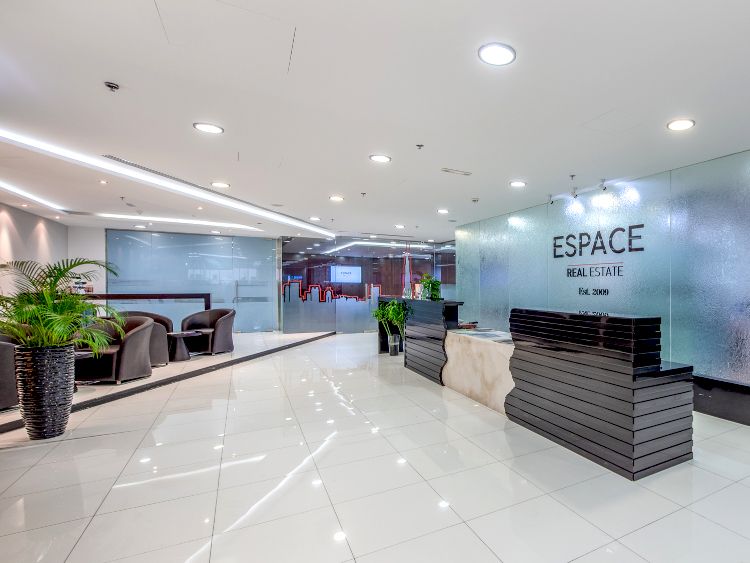 Do you need a property valuation?

We're always here to help.
Book a call with our team

As a truly customer-centric real estate agency, we offer a range of related services that are designed to make your property journey stress-free and successful from start to end.